On the kit decal sheet, full marks should go to the relevant Tamiya departments for their work here, with attention to detail usually seen in other sorts of kits - now, what are those noisy things with wings called? Stencilled antifreeze instructions on the Polish option and landing craft details - decal 21 - on the 5RHA tank are things usually overlooked. All the vehicles depicted are from the era before Normandy Cowls were fitted as a matter of course, and none carried the hedgerow cutting prongs.

The books mentioned are covered in more detail later, and photos in them will help with stowage and small details. The style of markings is typical of that used by the 7th Armoured Division in North Africa and the unit continued to use it throughout the NW Europe.


With suitable alterations it could be used for 1RTR - the red arm of service square would carry the number 51 for them - or for other 7th Armoured vehicles in NW Europe. See the listed books for examples. 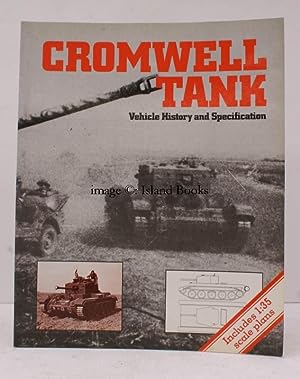 The style of markings was used in Normandy and later, although in common with many Cromwell units the Welsh Guards added extra stowage and camouflage nets, one veteran commander told me they had a strictly enforced regime of all vehicles being stowed alike. In the drive on Brussels, one tank fired so many rounds from its hull machine gun that the heat from the barrel set its cam net alight! Some Welsh Guards vehicles, at least in training in the UK, had a second, darker color in wavy blotches over the basic drab scheme, but in Europe they had one-colour schemes.

The AOP tank of 5th Royal Horse Artillery note - not "House" of 7th Armoured may be a suitable choice for Panzer fans who have run out of subjects, as it was a vehicle captured at Villers-Bocage and was run at least for propaganda photographs. AOP and command tanks had their guns removed to leave room for their new role, this tank appeared to have the usual 75mm gun's muzzle brake in place, unlike the dummy type on the Polish vehicle. Fourth option from 1st Polish Armoured Division is the personal vehicle of their commander, General Maczek. Photos of the vehicles show it to have had a dummy gun fitted, much the same in size as a 75mm but with a simplified muzzle brake.

This had no holes drilled through from side to side, and was a cut-off cone without the distinctive belling out of the real gun's brake. It also carried a horseshoe on the left-land hull machine gunner's side mudguard. I hope Polish practice for horseshoes differs from English ones, as the show is shown open end down, whereas for a good luck symbol in English it is open end up "to keep the luck in".

Other command tanks of the same division in that photo can be seen with no muzzle brake and another vehicle was T OLIVER which gives a possible simple variation. This had a short history of the Cromwell series written by David Fletcher, then Librarian and now also Curator, as a preface to a reprint of the Cromwell I Service Instruction Book. In the post war era the Comet served alongside the heavier Centurion tank , a successor introduced in the closing days of the Second World War on an experimental basis but too late to see combat.

The Centurion was formally adopted in and was partly based on the Comet design. The Comet remained in British service until , when the remaining tanks were sold to foreign governments; up until the s, it was used by the armies of various nations such as South Africa , which maintained several as modified recovery vehicles. Two examples were still being held in reserve by the South African Army as late as The tanks were stored until , when four of them were auctioned. Four Comets were delivered to the Irish Army in and a further four in Severe budget cutbacks affected the service lives of the Comets, as not enough spares were purchased.

The Comet appealed to the Irish Army as it was cheap to buy and run, had low ground pressure and good anti-tank capability. However, faulty fuzes meant the withdrawal of the HE ammunition, which limited the tank's role to an anti-tank vehicle.


The project was cancelled due to lack of funds. One is preserved in the Irish Curragh Camp and two more survive in other barracks. Cuba was also an operator of the Comet tank, with some 15 purchased from the UK before the Cuban Revolution of which saw the fall of US-backed dictator Fulgencio Batista's regime and the beginning of Cuba being under Fidel Castro's rule.

Thus, Batista was forced to seek his buying of arms from other nations, which included the UK, which also sold about 17 Hawker Sea Fury fighter aircraft together with the Comet tanks. After the collapse of Batista's government at the end of , the new Cuban government under Castro sought for replacement and repair parts and ammunition for their Comets from the British government, which promptly turned them down in conjunction with the USA's armaments blockade over Cuba. Burma as it was then known; now Myanmar was also another user of the Comet tank, with an estimated 25 bought from their former British colonial rulers in between the late s and the early s.

These were operated until around the s, up until which then they were most likely scrapped and replaced with newer tanks, such as the Chinese Type 69 main battle tank. This article includes a list of references , but its sources remain unclear because it has insufficient inline citations.

Please help to improve this article by introducing more precise citations. April Learn how and when to remove this template message. Design and development Background See also: Cromwell tank development. Service history World War II. Variants There were two Comet hull versions: Model A With the exhaust venting through the top rear of the vehicle engine deck similar to Cromwell.

These could be fitted with cowls to redirect exhaust fumes away from the air inlet vents. Cowls were usually split into two independent covers, as opposed to the single cover fitted to Cromwell. Model B A post-war update with twin fishtail exhaust pipes exiting through holes in the rear facing armoured plate. Cowls were no longer required. Early type B Comets had armoured covers over the holes through which the fishtail exhaust pipes would protrude, retaining the older Model A setup.

Little is known about it. FV Contentious The Comet was used as the basis for the experimental FV Contentious , an air-transportable self-propelled anti-tank gun mounting a mm L7 gun in an open mounting on the shortened hull of a Comet, and using the vehicle's hydraulic suspension system to adjust elevation, similar to the method used on the Swedish S-Tank. One or two prototypes were built and tested before the entire project was cancelled. See also Tanks portal. Retrieved 10 April Harwood Academic Publishers.